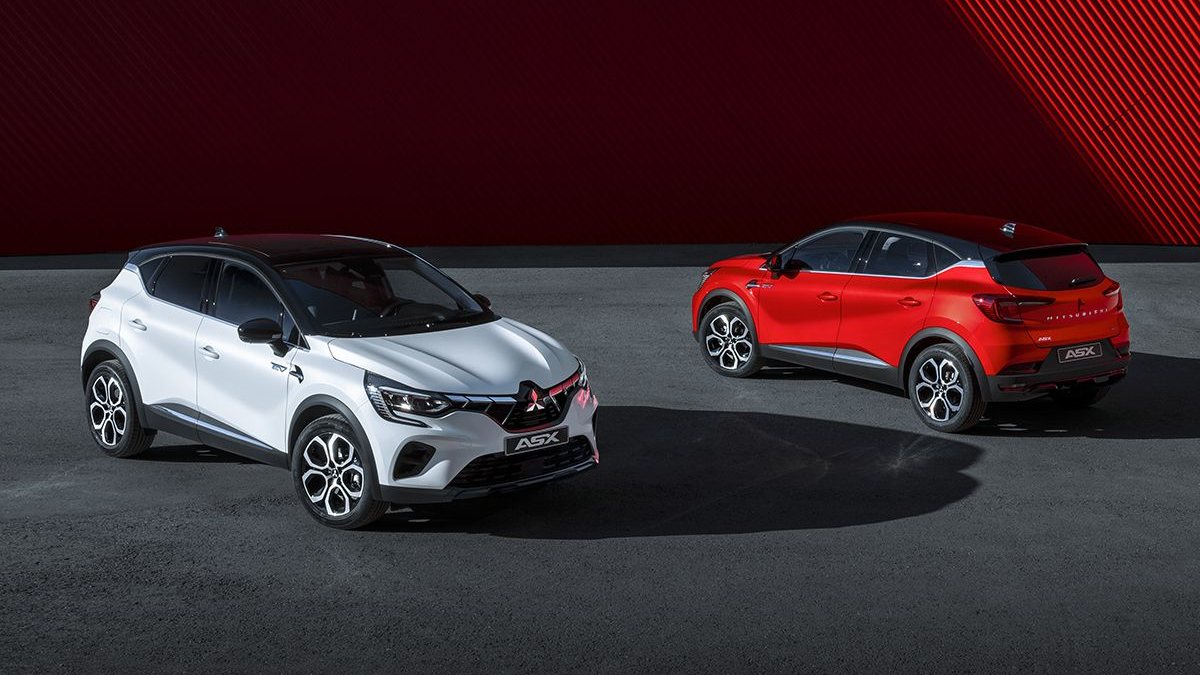 After all, Mitsubishi Motors is not ready to give up the European market. At the moment limited, in Portugal, to a range with only three models – the Space Star city car, the Eclipse Cross plug-in hybrid SUV (PHEV) and the L200 pick-up, that is, not counting the Outlander that was, for years, the best-selling PHEV in the Portuguese market), The Japanese brand will soon expand its range with the new ASX, which is nothing more than a rebadge of the Renault Captur, even coming off the same production line, the Renault factory in Valladolid, Spain..

Based on the same platform as the Renault-Nissan-Mitsubishi Alliance that services the Captur and Juke, the Common Module Family (CMF-B), the new ASX is one more SUV to liven up the B-segment disputebut it does not hide the obvious similarities when it is placed next to the Renault Captur, from which it also “inherits” the range of engines.

The new Mitsubishi ASX, on the right, and the Renault Captur, on the left. Discover the differences, beyond the emblem and the grille

Under the hood, there are exclusive mechanics that we already know from the popular French model, with supercharged gasoline, mild hybrid (MHEV), conventional hybrid (HEV) and PHEV versions.. Gasoline, the offer starts with the 91 hp 1.0 MPI-T, with the three-cylinder engine associated with a six-speed manual gearbox. It is followed by the 1.3 DI-T, a four-cylinder MHEV that develops 140 or 158 hp, depending on whether it is mated to a six-speed manual gearbox or a seven-speed dual-clutch automatic. It is this same 1,598 cm³ engine that constitutes the “soul” of the hybrid versions. The rechargeable ASX has a 10.5 kWh battery and is the most powerful in the range, delivering 160 hp, thanks to the support of two electric motors, one at the front with 67 hp and the other with 34 hp, which work as a motor. Boot. /alternator. The HEV version of the Japanese compact SUV has less powerful electric motors (49 and 20 hp) and also a smaller accumulator (1.3 kWh capacity), to deliver 145 hp, power that is transferred to the front wheels through a multi-mode automatic changeover. gearbox, an “imported” F1 transmission that we have already told you about.

With exactly the same measurements as the Captur (4.23 m long, 1.80 m wide, 1.57 m high), the ASX that will arrive in Portugal in March next year will offer a wide range of assistance systems to driving (ADAS), which naturally vary in number and complexity depending on the level of equipment chosen. By series, the Customers will be able to count on functions such as automatic emergency braking with pedestrian recognition, traffic sign identification, cruise control, lane change assistant, rear camera and parking sensors.. The most advanced option, in terms of ADAS, is the MI-PILOT, which combines the cruise control adaptive with Lane Keeping Assist, to “free” the driver from the steering wheel on longer motorway trips. This system will only be available in ASX with automatic transmission and in better equipped versions.

As for infotainment, there is the usual vertical central screen at the service of the multimedia system. Compatible with Apple CarPlay and Android Auto, this display 12.3 inches is also the command post for the driving modes, which are three for the entire range, except for the PHEV. This adds to Eco, Sport and My Sense, the Pure option, synonymous with traveling in purely electric mode.

Finally, a reference to the capacity of the trunk that, without apparent justification, falls short compared to the brothers of the Alliance in the gasoline and MHEV versions. While Captur and Juke offer a volume of 422 liters, the ASX stands at 401 liters.

There is no indication of prices, which should happen closer to launch. For reference, we remind you that Captur is currently sold among us only in hybrid and PHEV versions. The values ​​start at €29,680, price of the 145 CV hybrid, while the 160 hp PHEV is offered from €36,530. Below you can see the presentation of the new Mitsubishi ASX:

Previous articleKnife attack between Jerusalem and Tel Aviv… and killing the perpetrator!
Next articleWith the military leadership divided, it is Putin who gives orders to the generals on the ground