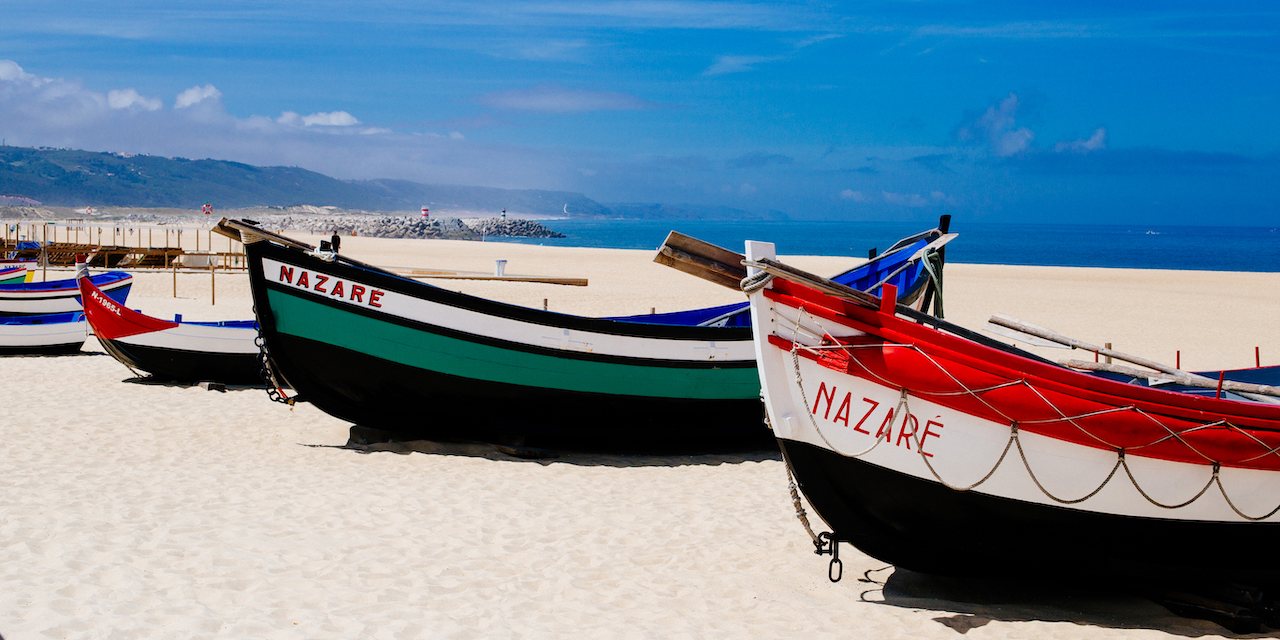 Today, fishing may no longer be the most important economic activity at the local level, but its relevance is still alive and engraved in the essence of Nazaré. Whether because of the way they dress, the deep-rooted traditions, the fishing neighborhoods, the folklore and the way people speak and act, fishing is, even today, part of the soul of the Nazarenes.

Heroes at sea and on land

In the memory of the inhabitants of the place there are still stories of times when fishermen, true heroes, went to sea in search of sustenance for their family, at the risk of embarking on a journey of no return.

The lack of a safe port in Nazaré meant that, until the 1980s, when it was finally built, going to sea was an adventure with no certainty of a happy ending. On the sand, barefoot, were the women who, in the absence of their husbands and children, changed their colorful clothes for black clothes, representing sadness and fear before the imminent arrival of tragic news.

If husbands and children were heroes at sea, on land the title belonged to these same women who assumed not only the management of the house and the family, but also the management of legal and economic affairs. Forced to work selling fish in local markets, to contribute to the livelihood of the household when the money brought in by their husbands from work was not enough, the role of women stood out due to its importance for family well-being and balance.

It is still worth noting the strength of this matriarchal society today. Dressed in bright colors, short-sleeved blouses, a headscarf (cachené), a black hat with a tassel, an embroidered shawl over the shoulders, black patent-leather sandals and the traditional seven wide skirts, the Nazarene women, especially those who are older and linked for the sale of fish – walk through the streets of the town, keeping alive the traditions that give so much charm to this fishing town.

The origin of the seven skirts.

It is not easy to determine with certainty the origin of the custom of the seven skirts worn by Nazarene women. The arguments used by the local population to explain the number of skirts are varied: from representing the seven days of the week or the seven virtues, to the relationship with the number of colors of the rainbow or the seven waves of the sea. There are many theories, but the origin of the use of skirts is based on an indisputable point: their connection with the sea.

From an aesthetic point of view, the use of the different skirts was based on the feminine beauty standards of the past, which emphasized slim waists and rounded hips. The more skirts they wore, the rounder their hips became. The seven skirts were used mostly on holidays, with a less showy option and fewer skirts for working hours.

Click on the image to see the hero’s journey

The sea as sustenance

Fishing was, for many years, the main economic activity in Nazaré, with the vast majority of the local population depending on it. One of the main craft techniques used was Xávega Art, introduced in the mid-18th century by fishermen from Ílhavo and the Lavos Coast.

The conditions of the Nazarene coast led to an adaptation of the trawling nets brought by these same fishermen. The typical boats -known as barcas-de-pico or de la xávega- designed to be able to enter the sea without capsizing and running aground more easily, had a flat bottom that extended to the bow and ended in a peak, with a cut to stern and without keel.

The industrialization of fishing and the construction of the port in the 1980s were some of the factors that led to the disappearance of this type of artisanal fishing. Over time, the few fishermen who were still dedicated to Xávega Art abandoned the trade for other more profitable ones.

Today it is no longer fishing that guarantees the sustenance of the Nazarene population, but rather it endures as an economic activity and an intrinsic part of the soul of Nazaré. Customs such as drying the fish in the sun -originated by the need to preserve the fish for the days of greatest scarcity- continues to be one of those that are maintained and can be enjoyed along the waterfront, next to the fishing boats lined up on the sand.

In the memory of those who were born and saw them born in Nazaré, there are times that are very different from today. Today, the sea continues to be an essential part of the life of the Nazarenes, but unlike the past, it brings with it a present and an auspicious future.

The same sea, a new life

From a small fishing village whose population was struggling to survive, Nazaré became a tourist destination known throughout the world. The origin of this fame? The sea.

Their heroes and their respective motives are, however, different today. The struggle for survival in the absence of viable economic alternatives has been replaced by a constant desire for adrenaline and self-improvement.

The heroes who face the waves of Nazaré today do so with a board on their feet, and their names are immediately catapulted to world fame. Nazaré has become a mecca for big wave surfing, hosting unrivaled displays of courage, strength and determination every year, seen live by thousands of people from around the world.

The times of suffering and scarcity are behind us. Today, Nazaré is witnessing the emergence of new opportunities, professions and socio-economic activities. All because of the sea. Mercedes-Benz was one of the brands that soon realized the importance of this new life.

Along with the launch of a new fleet of fully electric cars, the brand has expressed its principles related to sustainability and the preservation of nature, through various actions in Nazaré, which have involved not only big wave surfers, but also to the local community, customers and fans of Mercedes-Benz.

Among the various initiatives carried out by Mercedes-Benz in Nazaré, the construction of the Mercedes-EQ Lounge stands out, a space based on reusable and sustainable materials, with 4 charging stations for electric cars. As well as a lounge that serves as a base for Garrett McNamara during big wave season, the Mercedes-EQ Lounge is also intended to be a place for discussion, conversation and experience.

As long as there is sea, there will be heroes in Nazaré. The difference is that now, unlike yesterday, they have the eyes of the world on them.

Previous article
Situation point. What happened on the 215th day of the conflict in Ukraine?
Next article
Robbie Williams returns to Portugal in 2023 for a concert in Lisbon