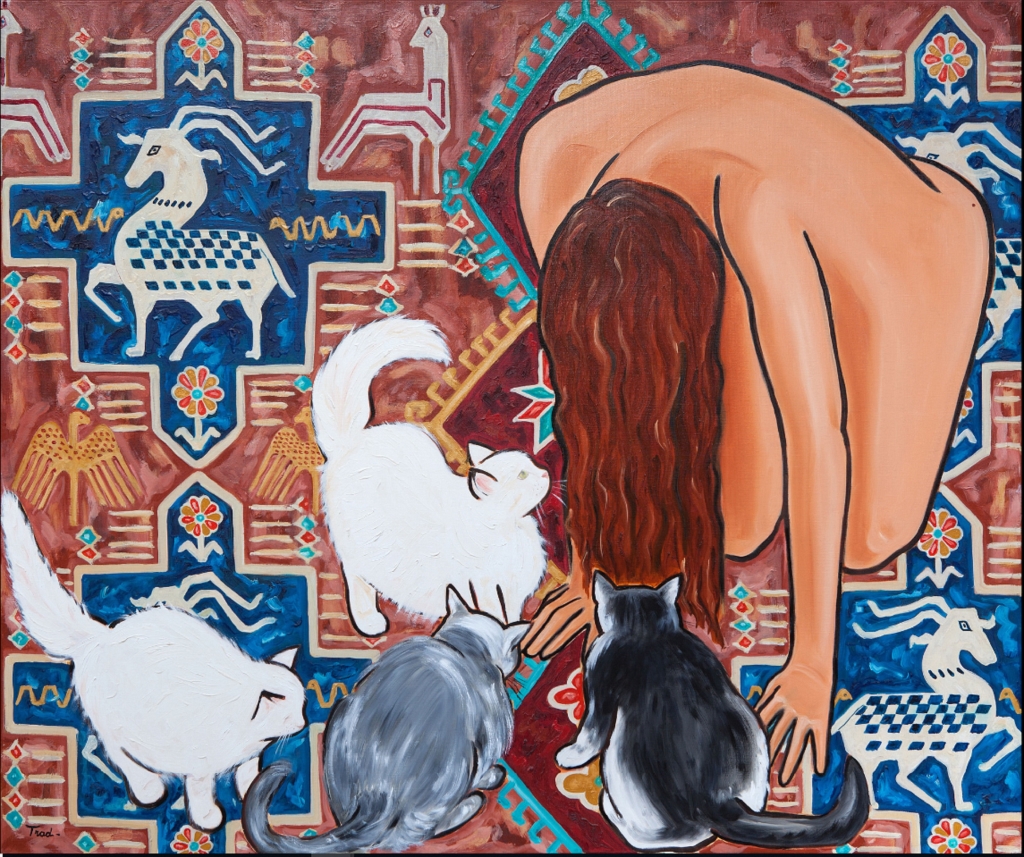 Mona Trad Debji (Antoine’s Library) is the name and title of an elegant book rich in content. The 280-page book gives us a picture of the artistic transformations witnessed by Dubaji’s path, characterized by the freedom and release of female passions for the body, beauty and high sensuality, in most moments that accompanied by his cat, as if they shared the same interior privacy with oriental features, or under the warm rays of the sun, or on carpets that enhance the orientalist climate.
Mona Trad Dubaji – “Paradise Lost” (oil on canvas – 120 x 100 cm – 2022)

Mona Dubagi, a fine arts graduate of the American University (1975) in Beirut, her favorite city, which she did not leave even during the civil war, continues to paint and hold exhibitions. His plastic themes always revolve around Lebanese traditions, with frames and elements in which the woman always intervenes, so he seems to be in love with two things: his femininity and orientalist frames, which he seems to is in relentless and continuous pursuit to Erase the memory of the war with beauty, with a woman, with the temptation of a naked and free body, stretched and relaxed in different situations and places in the background, and not Collect doors and windows left by the destruction of war and explosions. Bourgeois plastic formations gave birth to a new birth of a ruined place through the “Arab” landscape and warm, happy, bright colors. The book does not leave the eyes of boredom or, more dangerously, a feeling of closeness of the works, colorfully diluting the interest when opening its pages.
It highlights her constant and renewed attachment to a place that comforts her free woman to “perform” her total nakedness in defiance of reality and contrast with her ugliness, brutality and destruction. Mona does not accept any restrictions on a woman’s freedom and her complete unity with her body, enjoying various moments of freedom, lying on the carpet and reading, or in bed for relaxation and meditation, or sitting stroking her cat … the successive seasons with her, where winter ends, and spring slowly emerges, the women change their position among the blossoming trees and birds. Drinking his coffee, holding a rosary or “laptop” in his hands, as if preparing for the beginning of a better time, full of hope.

Realism characterizes his drawings of women in all their intimate, professional and other settings, from working in the fields to a sexy, dreamy woman in a luxurious frame, smoking a hookah or holding a smartphone … Oriental paintings by an oriental artist who insists on his individuality and freedom. He said: “Jean-Auguste-Dominique Unger and Henri Matisse dreamed of a similar world of women, although their dream did not come true in their lifetime. I want to paint the real world for women from their everyday lives, creating complex complexities that the orientalist could never dream of.”
Mona Trad Debji’s book consists of a series of vivid images of Oriental women in the privacy of their homes, reciting Omar Khayyam’s obscure rubaiyat, or simply relaxing. As for the attraction of the artist, it is the symbol of the freedom of Eastern women and their modern dreams, despite the waste of this freedom and dreams in some environments, which are deeply rooted in their backwardness until now. The naked female body is round, full of rebellion, with intricate lines and twisting movements to emphasize the charm of the oriental female body without fear, shame or taboo. Mona does not hide the fact that Unger’s work has influenced her to some extent in terms of climate and state of meditation, and believes that today’s women are not traditional, but rather different from the modern era, social communication and its many tools. His oriental woman was transferred from the temperate climate of Lebanon to the warm regions under the influence of Gauguin’s Tahitians, with a difference in the status of his women within the salons of the orientalists, and not belongs to its warm nature and natural elements like that of Gauguin.

Nudity has no sexual meaning, as it is a celebration of the beauty of women in the East.

The origins of the artist’s influence come from the period of post-impressionism. His paintings are simple, expressive and modern, but the nudity is not so much a sexual meaning as a glorification of the beauty of an oriental woman’s body. However, we notice a side that can also be negative, because his paintings are, as it were, reincarnated, one from another, under the influence of a soft bourgeois attitude, which may lack more diversity and imagination, so as not to shake. the theme and does not fall into monotony. . However, we can’t help but notice the excellence of smooth lines and ornamentation and unique coloring.
The book also contains a detailed account of the artistic and cultural activities in which Mona Dubagi engaged in continuing to identify with her themes, interests and fascination with women as a woman living in complete freedom of artistic expression. The result is a charming, sumptuous book, full of painting and colors, which make up the uniqueness of its style, color and conscious mood here and immediacy there.

Seven maritime bars closed to all navigation and four conditioned

The WhatsApp desktop app allows you to share contacts in conversations

BMW celebrates 50 years of the M with the return of the 3.0 CSL