One street in front of another… pro-hijab demonstrations in Iran 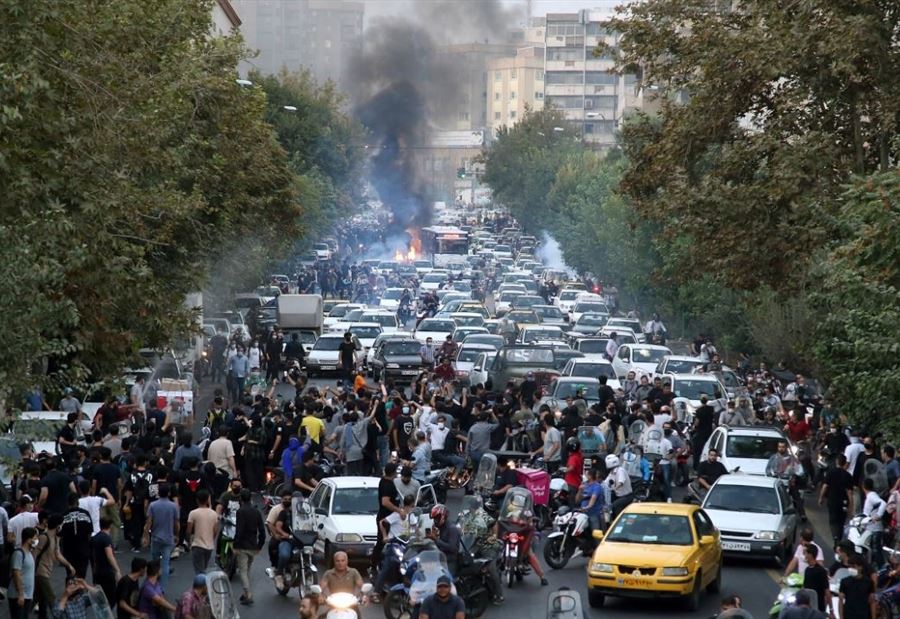 Simultaneously with the beginning of the demonstration in support of the “hijab” on the seventh day of the protests, after the death of Mehsa Amini, a young woman who was arrested by the moral police in Tehran, the protests in Iran peaked.

At the same time, the Internet and communications are still almost completely cut off from the country.

According to the official news agency IRNA, it is expected that today’s biggest gathering will be held in front of Tehran University after the Friday prayer at the invitation of a government institution.

The Islamic Development Coordination Council, which is responsible for organizing the official demonstrations, called the protesters “mercenaries who insulted the Quran and the Holy Prophet, may Allah bless him and grant him peace, set fire to mosques and the holy flag of the Islamic Republic, and destroyed women’s veils and public places. They insulted and…” he described. It harmed public security.”

Iran’s army announced on Friday, in the latest official response to these opposition protests, that it will “fight the enemies” to ensure security and peace in the country.

The army’s statement said: “These despicable actions are part of the enemy’s malicious strategy aimed at weakening the Islamic system.”

In turn, Iranian news sites reported that the Ministry of Information warned on Thursday that participation in Amini’s death demonstrations was against the law and that demonstrators would be prosecuted.

The ministry announced in a statement: Considering the exploitation of recent events by counter-revolutionary currents, any presence or participation in such illegal gatherings (…) will lead to legal prosecution.

In a stark warning to protesters who have taken to the streets to express their anger, Iranian President Ebrahim Raisi said on Thursday that “acts of anarchy” were unacceptable, Reuters reported.

In a press conference on the sidelines of the United Nations General Assembly in New York, he added that he had ordered the investigation of Mehsa Amini’s case.

Raeesi, who has faced the country’s biggest protests since 2019, said: “There is freedom of speech in Iran (…) but chaos is not acceptable.”

The protests caused by Amini’s death are the biggest protests in Iran since 2019.

According to the latest official TV report, 17 people, including demonstrators and police, have been killed since the protests began.

But the death toll could be higher, as the Iranian Human Rights Watch in Oslo said 31 people were killed in the protests.

According to AFP, Iranian authorities denied any involvement of security forces in the killing of protesters.

According to the Associated Press, the scope of Iran’s ongoing unrest, the worst in recent years, remains unclear as protesters in at least 12 cities continue to vent their anger at social repression and worsening crises in the country, and clash with security forces and militias.

Widespread outages continued for Instagram and WhatsApp, which protesters use to share information about the government’s ongoing crackdown on dissent.

Authorities also appear to be disrupting online communications with the outside world, a tactic human rights activists say the government often uses in times of unrest.

On Thursday, Washington announced the imposition of economic sanctions against Iran’s morality police and several security officials for “violence against demonstrators” and also for the death of a young woman, Mahsa Amini, after her arrest.

In a statement released by AFP, US Treasury Secretary Janet Yellen said the sanctions target “Iran’s morality police and senior Iranian security officials responsible for this crackdown” and “represent a clear commitment to It is the defense of human and women’s rights in Iran and the world.”

Women featured prominently in the protests, as they waved and burned their headscarves and some cut their hair in public, Reuters reported.

Amini’s death has sparked outrage across Iran over issues including restrictions on personal freedoms, including strict restrictions on women’s veils, as well as an economy reeling under the pressure of sanctions.

The rulers of Iran are afraid of the renewal of unrest in this country in 2019 in protest against the increase in the price of gasoline, which was the bloodiest price in the history of the Islamic Republic. Reuters reported that 1,500 people were killed in these protests.